Des Townson's May 1956 lines drawing for a small sailing dinghy was modestly titled, "11' Yacht". At the time he could've had no idea his ninth design would become his most enduring creation, spawning hundreds of replicas over the following six decades.

Des built the prototype Atarangi during the winter of 1956 in a garage rented from Ted Old on the Great South Rd, Greenlane - opposite Atarangi Rd. Construction was one skin of fore/aft cedar laid over one keelson to gunnel skin of kahikatea. One bulkhead was positioned forward of the mast step, and one at the rear of the cockpit.

Atarangi was launched in the spring of 1956, with a view to displaying it in a boat show to be held at the Tamaki Yacht Club a few weeks later. Unfortunately, only days prior to the show, the lightly built hull fractured amidships on the port waterline area while being sailed by Des off Kohi beach.

Des repaired the hull by re-enforcing the cockpit inside with ¼ x ¾ inch ribs at six-inch centers. Atarangi was then displayed in the Tamaki show and generated considerable interest, with twelve orders taken over the two days. The Zephyr Class was under way. The construction changed to three skins of 1/10 inch veneer and remained unchanged throughout the Townson building era.

Des sold Atarangi to Geoffery Jowitt. Ken Lusty who was later to own the marine supply company Lusty and Blundell was the third owner. Paul Bishop bought the boat in 1964 for 80 pounds and looked after it for the following thirty-seven years. It's because of his care the boat remained in sound condition at the time of my purchase in September 2001.

At some stage after Des's ownership the boat was renamed Talei and registered in the Moth Class, number 8013. It was the fitting of a longer mast and boom, in line with the dimensions the class uses to this day. The boat appears to still have the original deck, centre-board, rudder, rudder stock, tiller and tiller extension.

I've refurbished the boat to as original condition as possible, with Des providing a 1950's cotton Boyd & McMaster Zephyr sail, which greatly assisted the authenticity of the project. Atarangi was relaunched at the 2004 Auckland Champs, with Des having the first sail. Since then, its been on display at the Auckland Maritime Museum on permanent loan. It was briefly liberated to sail in the 50th Jubilee Zephyr Nationals. Atarangi remains 98% original, a fitting time capsule to a simpler time in the dinghy racing history of New Zealand. 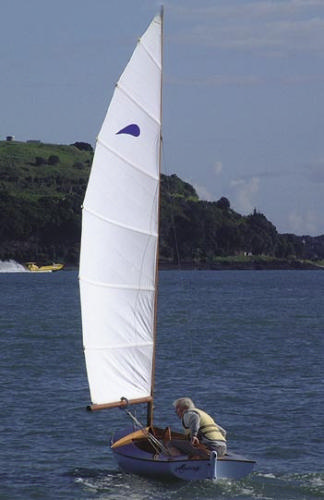